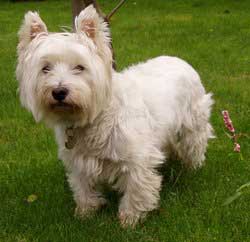 West Highland White Terriers are a breed of dog known for their small size and white coat; their fans often call them simply Westies. They are friendly, good with children, and thrive on lots of attention. Like most terriers, they have plenty of attitude (some might say "spirit") for a dog their size. This breed is commonly recognized because it is used as a mascot for a Scotch whiskey.

Westies are essentially either white Cairn Terriers, who occasionally whelped white puppies naturally, or white Scottish Terriers; references vary. In Argyll (or Poltalloch) in Scotland in the 1800s, for perhaps as long as a century, a Colonel Malcolm and his family bred these white dogs to develop a new breed. The white coat made them highly visible when hunting on the Scottish moors and easily distinguished them from their game. Originally the breed was known as Poltalloch Terriers, although they were also known as Roseneath Terriers, White Roseneath Terriers, and at the end of the 19th century, briefly as a white variety of the Scottish Terrier.

This breed, descended from working terriers, has a lot of energy, tenacity, and aggression towards its prey, which was originally the fox and other, smaller animals. It needs regular excercise, although its size makes it a good apartment pet. Many of these dogs have skin allergies, and its personality is more excitable than even some other terriers. They are alert and consider themselves guard dogs, although their size prevents them from providing any real intimidation. They are independent thinkers and must be trained firmly from an early age.

They weigh about 15 to 22 pounds (7,5-10 kg) and their average height is 11 inches (28 cm). Their tails, short naturally, are never docked and are held upright. They have a soft undercoat and a harsher outer coat, about 2" long, that requires regular grooming. 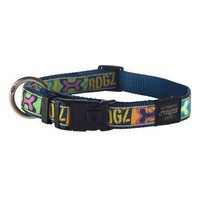