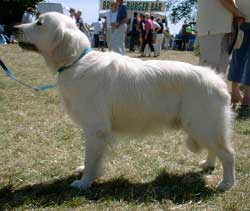 The Golden Retriever is a relatively modern and very popular breed of dog. This is a medium large breed, and very active and fun-loving but also exceptionally patient, as befits a dog bred to sit quietly for hours in a hunting blind.

In appearance they are strikingly similar to a yellow labrador retriever especially when young, the main obvious difference being the longer coat of the golden retriever. To confuse the two breeds is a serious faux pas to a fancier of either, of course.

Like the Labrador, they are noted for their intelligence and their affection for people, and their tolerance of children. The other side of this is that they require lots of company to be happy. They do well in obedience trials, and make excellent guide dogs. While they may not do quite as well in field trials as Labrador Retrievers, they are excellent hunters famous for their outstanding scenting abilities. They are exceptionally eager to please their owners.

A Golden Retriever reaches its full height at about one year of age, and its full weight at about two. While it matures physically at about two years' age, mentally it will not be fully mature until three or older, and many owners comment that their dogs retain their puppyish nature for life. They are natural clowns.

The breed was originally developed in Scotland, at "Guichan", the border country estate of Sir Dudley Majoribanks, later Lord Tweedmouth. For many years there was controversy over the original breeds that were crossed, and especially a romantic story concerning the purchase of a whole troupe of Russian sheepdogs from a visiting circus enjoyed great popularity. In 1952, the publication of Majoribanks' breeding records from 1835 to 1890 removed all doubt.

The original cross was of a yellow-coloured dog, Nous, with a Tweed Water Spaniel bitch, Belle. The Tweed Water Spaniel is now extinct but was then common in the border country. Majoribanks had purchased Nous on 1865 from an unregistered litter of otherwise black wavy-coated Retriever pups. In 1868 this cross produced a litter which included four bitch pups. These four became the basis of a breeding program which included Red Setter, sandy-coloured Bloodhound, St Johns Water Dog of Newfoundland, Springer Spaniel and two more wavy-coated black Retrievers. The bloodline was also inbred and selected for trueness to Majoribanks' idea of the ultimate hunting dog. This vision included a more vigorous and powerful dog than previous retrievers but still exceptionally good with people and thus gentle and trainable. Russian sheepdogs are not mentioned in these records, nor are any other "working" dog breeds. The ancestry of the Golden Retriever is all sporting dogs, in line with Majoribanks' goals.

Golden Retrievers were first accepted for registration by the Kennel Club of England in 1903, as 'Flat Coats - Golden'. They were first exhibited in 1908, and in 1911 were recognised as a breed described as 'Retriever (Golden and Yellow)'. In 1913 the Golden Retriever Club was founded. The breed name was officially changed to Golden Retriever in 1920. 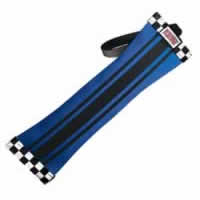