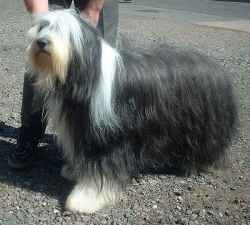 The Bearded Collie or beardie is the traditional dog of the Scottish shepherd, but was used to herd both sheep and cattle. As such it is essentially a working dog, bred to be hardy and reliable, able to stand up to the harshest conditions, and the toughest sheep. The working bearded collie became less common in the last few decades and might have died out, but thanks to the efforts of a relatively few shepherds such as Tom Muirhead and breeders like Brian Plummer the breed has survived and is becoming more popular.

It has been exported to Australia and the United States, and finds favour among those looking for an independent and intelligent sheep dog. The beardie gained its epithet of the 'bouncing beardie' because dogs would work in thick undergrowth on the hill, and would bounce to catch sight of the sheep.

It is difficult to distinguish between fact and legend in looking at the history of a breed, but it is believed that in the 17th Century the Lowland Polish Sheepdog was bred into the local Scottish dogs, to give the typical appearance of the working strain of beardie, and that in the 20th Century Old English Sheepdog may have been bred in to produce the longer coat of the typical show beardie.