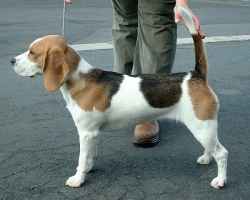 A Beagle is a medium-sized dog breed and a member of the hound group, similar in appearance to a Foxhound but smaller — in fact, the smallest of the scent-hunting hounds — due to its shorter legs, and with longer, softer ears. It has a somewhat domed skull; a medium-length, square-cut muzzle; large, hound-like hazel or brown eyes; long, low-set ears, turning towards the cheeks slightly and rounded at the tips; a medium-length, strong neck without folds in the skin; a short, slightly curved tail; an overall muscular body; and a medium-length, smooth, hard coat in tricolor (white with large black and light brown spots) or any combination of the three. The UK Kennel Club describes it as "a merry hound," and it is indeed a cheerful, energetic dog.

As well as making excellent (if not very trainable) pets, Beagles are used for hunting. Beagling has been referred to as "the poor person's foxhunting," as a Beagle pack (30-40 dogs) is followed on foot, not horseback. The usual quarry is the hare. Beagles are admired by some for the bloodcurdling "Beagle music" they emit when in full pursuit. Beagling, like foxhunting, is still legal in England, but may not remain so for long.

Beagles (or their ancestors) appear to have been used for hare hunting in England as early as the reign of Edward III, who had a pack of up to 120 hare hounds with him on the battlefield during the Hundred Years' War. The first mention of the beagle in English literature by name dates from 1475. The origin of the word "beagle" is uncertain, although it has been suggested that the word derives from the French begueule (meaning "open throat") or from an Old English, French, or Welsh term meaning "small."

Beagles have superb noses and, despite their self-willed temperament, are sometimes used as sniffer dogs for drug detection in luggage. Beagles were chosen because they are small and easy to care for, and because they are not as intimidating for people who are uncomfortable around dogs.

The Peanuts comic strip character Snoopy is a Beagle. 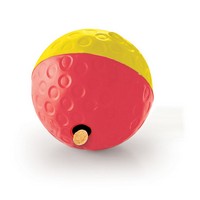