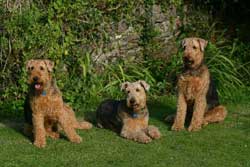 The Airedale Terrier is the largest terrier and originates from the Aire valley in Yorkshire. It is sometimes known as the "King of Terriers" because it is said to be able to do any job that any other dog can do, only better.

Originally breed in the nineteenth century to hunt otters, water rats and polecats along river banks. Thought to be a cross between the now extinct Wire Coated Black and Tan Terrier and the Otter Hound. The breed further evolved to breed out the large ears, light eyes and heavy coat. Until the 1880's the breed was known by names such as Waterside Terrier and Bingley Terrier.

The intelligence and tenacity of this breed has meant it has found many roles. Used by the police and in guarding duties throughout this century. They have also been used in the past as guide dogs for the blind.